Light Reinvented in “Forces of Nature” 2010

Catarina Pinto Leite shows thirty paintings, the majority of them in black and white, at Galeria São Mamede, in Lisbon. 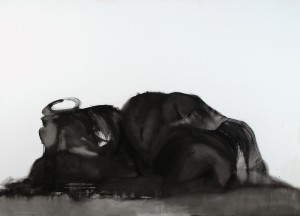 The eighth individual exhibit by Catarina Pinto Leite opens next Thursday at Galeria São Mamede, in Lisbon, where it will remain open to the public until January 15th.

The exhibit is composed by thirty oil paintings, the majority of them in black and white… and grays. Forças da Natureza (Forces of Nature) is the name of this body of work, executed in a «very intense period of total immersion», the artist shares with NS’. Although all belonging to the same set of works, each painting is a singular case: «Some of them speak loads to me and others less, it depends on the relationship I established with each of them, but painting is always a pleasure», she says.

In the catalog, critic Martim Lapa says that in this set of works, «object of an apparent minimalism resulting from the absence of color, (…) the landscape is now stripped of all intention of realistic nature», in a transfiguration which «will allow all interpretations, opening up to a larger universe of abstraction».

Regarding the artist’s paintings, Vasco Graça Moura wrote: «Traditional perspective is altered, matter gains new consistencies, views merge or intertwine according to the forces dictated by an immemorial lyric and oneiric impulse, while light is reinvented as a brief shine which irrupts unexpectedly from the reverse side of day or from the shadows in a mute suspension, here and there allowing a glimpse into the unnamable and the forbidden».

The artist now dedicates herself exclusively to her own work, but she once worked in restoration at Oficina Ocre. She left that line of work because she felt there was no space for creation there, but she recognizes its obvious importance. «The retouching and the glazes gave me manual technique», she says. Besides Lisbon, Catarina Pinto Leite has exhibited her work in Madrid, Porto, Régua, Funchal, Oeiras and Montijo.