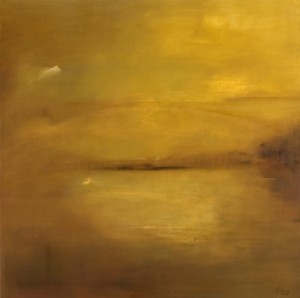 “A landscape can be a place of intimate restlessness”, where “light is reinvented as a brief brightness which irrupts unexpectedly from the reverse side of the day or from the shadows in a mute suspension”, as written by Vasco Graça Moura in the preface he dedicates to Catarina Pinto Leite on the occasion of her paintings exhibited in February of 2004 at Galeria São Mamede, in Lisbon. Two years later, her visual language remains true to itself, between the nocturnal tones with a melancholic resonance and the surprising dawn with incandescent reds.

In the relationship which it establishes between the phantasmagoric and intimate vision of nature and its spatial dissolution, landscape is a state of mind in Catarina Pinto Leite’s painting, marked by subtle luminous vibrations.

Fluent, dense, atmospheric, her paintings of silent glazes transport us to the immenseness of oceans, clouds and planes of infinite horizons.

From the darkness emerges the evanescent and subtle light that can be seen in sudden whites, wisely applied. “Efeitos Fugidios” (“Elusive Effects”), 2006, and “Para além de nós” (“Beyond us”), 2006, are examples to keep in mind, with its greens, blues and ochers, and, evoking the city of Porto, “Segredos do Rio” (“Secrets of the River”) (Douro), 2005, in cold bluish greens. The surrounding fog barely allows us to see the vague suggestion of a bridge, in a painting with warm tones titled “Encanto” (“Enchantment”), 2005, with yellows and diluted ochers. In the elongated painting “Travessia” (“Crossing”), 2005, the intense orangey red stands out, as well as in “A Ilha” (“The Island”), 2005.

Luminosity is primordial in the abstract landscapes of Catarina Pinto Leite, who doesn’t forgo the different nuances of light/dark.

In “Abtracção” (“Abstraction”), 2005, daytime tones, bluish greens, yellows, ochers and sudden bursts of white tones promote the dissolution of borders in the diffuse vision of a space of infinity.

In “Um Vago de Visão” (“A Vague of Vision”), 2006, the eye wanders over successive horizons, in the uncertainty of what is undefined in dense browns, orangey ochers and scarce whites.

The painting, continuously undone and redone in the persistent horizontality of the landscape, triggers in us the ability to see, feel and reflect on that open and unlimited space.

Looking at the exhibit as a whole, we see paintings that, in terms of landscape, symbolize night and day.

The night hides what is revealed by the day. From the most obscure darkness rises the subtle redemption light of dawn. In the brightness of the new day, everything is dissolved into the luminous transparency of the atmospheric space. The mystery of nocturnal darkness is countered by the vibrant daytime dissonance of vivid color, in the meantime recovered with its utmost purity.