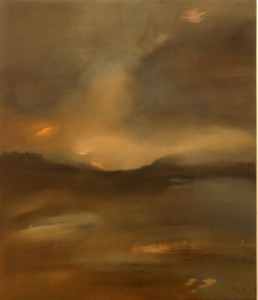 A landscape can be a place of intimate restlessness, as told by the very personal nature of Catarina Pinto Leite’s paintings. Representation is then disconnected from conventional coordinates, traditional perspective is altered, matter gains new consistencies, views merge or intertwine according to the forces dictated by an immemorial lyric and oneiric impulse, while light is reinvented as a brief shine which irrupts unexpectedly from the reverse side of day or from the shadows in a mute suspension, here and there allowing a glimpse into the unnamable and the forbidden.

Catarina revisits nocturnal tonalities that trespass the atmosphere and which Caspar David Friedrich would have been happy to explore, and finds muted romantic echoes, made from vibrations and reverberations which evoke the famous cadencies of Gérard de Nerval: “Ma seule étoile est morte, – et mon luth constellé / Porte le soleil noir de la Mélancholie”. Because these paintings speak of a transparently organized melancholy, through the intermittent darkness and the luminosity of its occasional “soleils noirs”, in its propositions of incessant drift between the inside and the outside, between world and soul, in numerous presences, scintillations and resonances of a radical solitude, in their own transitions from the spatialized fluids into the incrustations and densities of matter.

These are marks, blotches, effusions which are segregated and spread like a time of silent glazes, proceed with subtle musicality, and float half-way between the gestural, the informal, the expressionist, with some more sporadic referential morphologies and suggestions… In them, there are traces of what could have been planes and seas of an obscurely and obstinately persecuted memory, fantastic clouds, mountains of shadows and emptiness, in its space-times which are magically built (hypnosis? hallucination?) as refuges of the solitary being and as the opening of visionary horizons.

If we continue to stare at them, the mind is filled with  more loose fragments of poems, like the bitter “yesterday the sun set and the night fell” of the sestina by Bernardim, or the fatal “eclipse in which the sun will suffer” from the sonnet by Camões. But, whichever way we look at them, these paintings, which are ways of representing the night, also put in question night’s own opacity.