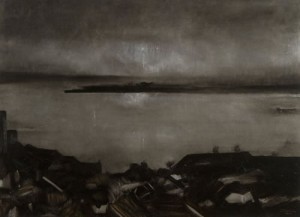 Behind paintings, there are always stories. Often, artists hide them and take refuge in a silence particular to that world of shapes and colors where words rarely are allowed to enter. In order to know better what is hidden behind the painting, it’s necessary to break the natural barrier that the painter creates and, if he or she so allows, to enter that world where art happens.

It’s no different when it comes to the work of Catarina Pinto Leite. We learn that, for this exhibit, the artist wanted to work on the theme of the city where she lives, that city which possesses a light different from all others, a light which defines it and gives it its unique quality. After her work led her to the collection of the Lisbon Photography Archive, she realized that black and white sufficed – it had sufficed for decades – to communicate that luminous quality that she was interested in. This primordial contrast was followed by the application of silver leaf – a technique she already mastered, because for years she performed the patient work of restoring old paintings – which fills the place of the sky: a silver sky, but also a mirror, since this metal was one of the materials old mirrors were made of.

With her work marked by that technique of constantly remaking the old, which she masters, perhaps Catarina Pinto Leite was searching solely for the liquid and metallic shine suggested by the faded winter mornings, when a heavy fog originating from the river engulfs the neighborhood of Baixa, rises through Rossio and Avenida and reaches the new neighborhoods located North of the river, blending with the noises and smells of the city and highlighting the harsh cold of urban December. Perhaps the artist was only thinking about the fading of the colors and the shapes that humidity brings with it, or the light points from traffic lights, lighthouses, street lamps – and the sun at 3 pm – which appear amongst the shadows.

This is urban painting, and also a little mundane, reflecting everyday life in the big city. This is a painting that also searches for its roots in the Romanticism of the eighteenth century, which saw nature as a reflection of the artist’s soul. Since the eyes were, and are still, a mirror of the soul, so does this metallic light reflect the state of mind of the person who sees it and paints it. Even in a literal sense, since the silver allows us to see the silhouette of the visitor in the painted landscape. This artist’s work is worth following and carefully watching, along its future development